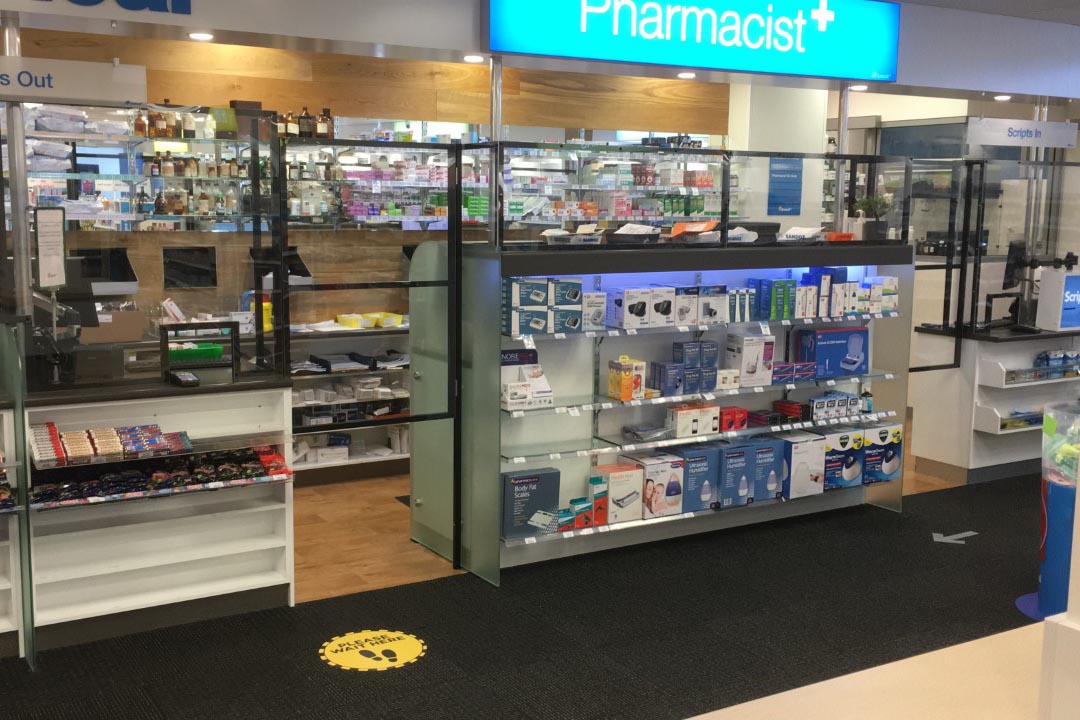 The challenge of dealing with the new and unprecedented COVID-19 crisis meant the pharmacists and staff at Amcal Coffs Harbour had to adapt and innovate in ways they could never have previously imagined.

Located next to the base hospital’s COVID-19 clinic placed the pharmacy in the thick of local health efforts to battle the virus.

Pharmacy Manager Sonya Elley said that in light of the fact they were dealing with an unknown in COVID-19, the focus was on making the best-informed decisions for patients and staff.

“Being co-located with a large medical centre and allied health services within our building meant we had patients who were especially vulnerable; we had to take that into consideration,” she said.

“On top of all the stresses of the pandemic, there was a lot of confusion as the hospital was undergoing major renovations, with roadwork and access issues compounding patient confusion.

“Many people mistakenly thought the pharmacy was the COVID-19 clinic, and then we had to triage their needs while also protecting our staff and other patients.

“We were committed to being considerate of people who came in, many were scared as they weren’t sure if they or those around them had the virus.

“Our approach was to triage, question, inform and isolate. If the person had already been tested and was coming in for medications, we asked them to wait in their car as we were still able to serve them via mobile phone.

“From the carpark, we facilitated supply through their car window or organised home delivery.”

Proprietor Mena Abdel Messih said the pharmacy’s proximity to the hospital meant patients coming in and asking: ‘Where is the clinic? I want to get tested’.

“We knew this couldn’t continue – we had to protect our staff and patients, particularly those in the 500 nursing home beds that we service.

“The last thing we wanted to do was transmit anything to a nursing home via dose administration aids.”

“As additional protection, we sealed a barrier between the back of house and front of the house in the pharmacy to split the team.

“We had to close the front door first, and it took a couple of weeks to get organised, get some more shields around the back of the store, reorganise the store and separate teams and understand how that would function.

“Then, we opened the pharmacy again for patients, but there were barriers.

“It was quite an exciting time; suddenly, you had to change a lot of what you were doing - you had to sacrifice to protect everyone. At the same time, every script you dispensed was 2-3 times more work.

“But we were trying to be there for the community in every way we could.”

“At the pharmacy, we established a drive-in service where patients could order and receive their products from the car park without actually leaving the car.

“We had phone consultations to the pharmacist to assist them with their health needs and these could be escalated to a telehealth service which is offered by our co-located doctors.”

The COVID-19 crisis came hard on the heels of the catastrophic bushfire season the pharmacy and its staff experienced first hand.

“There were people evacuated from their homes who needed medication, how do you deliver with no fixed address?” he said.

“We established drop-off spots at key locations, which was increasingly difficult as many roads were cut-off from fire.

“There were also many large evacuation centres set up where people who didn’t know if they had a house were camping out.

“These evacuation centres had limited medical supplies and no toiletries so we provided boxes and boxes of toothpaste, toothbrushes, toiletries and so on.

“We established channels of communication with people who evacuated their house without anything and were able to help people who had medication concerns, through advice and emergency supplies.”

Ms Elley said one staff member lost a home in the fires.

“They were still fronting up to work giving the best service they could and didn’t say anything until after the fact,” she said.

“It started to become a bit surreal because every day you woke up expecting it to be low visibility and smoky and it went on for an extended time. We were hemmed in by fires on all three sides, leaving the ocean as our last resort.”

Mr Ledger said he had family “arrive on my door with backpacks and photo albums who evacuated and had no way of knowing if their homes were still standing.”

“That was pretty close to home and the ongoing unknown and threat of destruction was psychologically exhausting.

“But times of adversity bring people together and focus on what really matters; love, laughter and the spirit to persevere.”