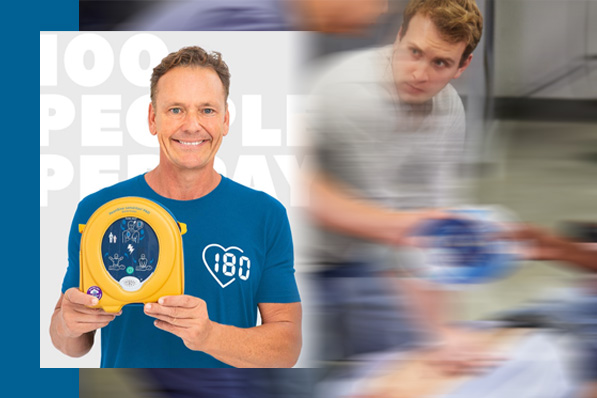 As healthcare professionals, community pharmacists are all too aware of the devastating effects cardiac arrests have on patients and their families throughout Australia.

Quick action can often save a patient, but the data shows we are not doing enough. Research varies but generally it is believed more than 33,000 people experience an out-of-hospital cardiac arrest in Australia every year. The survival rate for these people is estimated at 9 per cent on the high side, and as low as 5 per cent on the downside. By any measure, these survival rates are frightening.

For every minute that passes after a person has a cardiac arrest, the chance of survival decreases. Quick action can save a life; this is why the Guild has joined an impressive project to raise the awareness of cardiac arrest, and to start the process of trying to have an automated external defibrillator (AED) located in every pharmacy throughout the country, with pharmacy staff fully trained in how to use it.

With pharmacies located central to every suburb and community – many with extended operating hours into the evening and on weekends – having an AED in-store can be a life saver. And with first aid/CPR trained pharmacists and team members on hand, your local pharmacy makes an ideal focus point for the location of an AED. The skills and training found within pharmacies means they can play an integral part in raising awareness and increasing the survival statistic from out-of-hospital cardiac arrest.

And AEDs can make all the difference, as is noted by St John Ambulance, which reports survival rates of up to 70 per cent can be achieved if an AED is on hand.

As I said, having an AED in every pharmacy is ambitious; to help us work towards this goal we have teamed with Heart180, headed by Guy Leech, who is on a mission to raise awareness of out-of-hospital cardiac arrest and to do something about it. Established in 2016 as part of Guy Leech’s lifesaving and sports health programs, the Heart180 Mission is simple – ‘Position an AED or Defibrillator within 180 seconds of every Australian’.

To be transparent, his company sells this equipment. I am more interested in the campaign to get one in every pharmacy and to ensure all the staff are trained in their use, and confident to apply that training in an emergency.

Advice from the Heart Foundation is if sudden cardiac arrest occurs, the first step is to call triple zero, followed by compression-only CPR and then to use an AED. Not having access to an AED is simply dangerously problematic.

Our partnership will also focus on encouraging pharmacies to have staff trained and confident in the use of an AED. Guild members are being provided with access to the Heart180 training modules which take about 15 minutes to complete.

The training is important in lifting confidence levels. These AEDs are very simple to use but, like anything new, especially when it is a medical device, we need to get people familiar with their use so that that utilising them in an emergency becomes second nature.

We will also be letting communities know our pharmacies have an AED so that in an emergency precious time is not wasted with people looking for help.

Part of this public awareness will be encouraging other businesses and premises to have an AED. For instance, according to Heart180, about 70 per cent of gyms across Australia don’t have a defibrillator, and they’re a place for intensive exertion. It’s not good enough.

I am confident our campaign will help lift the awareness of out-of-hospital cardiac arrest as well as increasing the accessibility of these units. If one life is saved our efforts will have been rewarded.