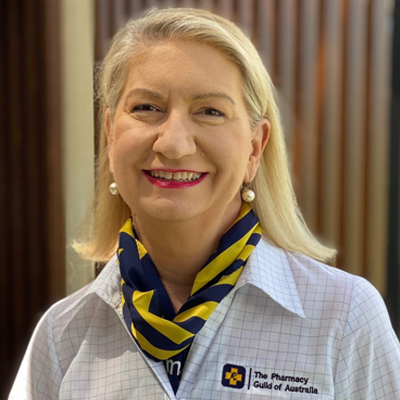 Suzanne Greenwood joined the Guild as Executive Director in August 2019. She is the former CEO of Catholic Health Australia and has held senior positions with a number of membership organisations in the health and community services sector. A lawyer by profession, Ms Greenwood was the 2017 Australian Healthcare, Pharmaceutical and Biotech Lawyer of the Year, is an experienced executive and has held numerous Board positions in the health and social services sectors.

Colm Maguire joined the Guild in August 2017 as the Group Executive Pharmacy Transformation. Colm previously was the CEO of Touch Football Australia where he had led the overall recovery of the organisation, significant growth, a collaborative focus to outcomes and achieved outstanding results. Colm has worked at leadership levels from state through to national within a member focussed environment. He is an experienced and authentic leader focussed on the need for balance, a positive approach and innovation.

Fiona Mitchell joined the Guild in 2001 and has responsibility for Community Pharmacy Agreement negotiation and implementation; development, and coordination of healthcare and pharmacy policy initiatives. Before joining the Guild, Fiona worked for a number of years in various executive level roles in the NGO sector. She has a biomedical degree, and post-graduate qualifications in Management and Research Methodologies.

Tony Allen joined the Guild in 2014 as Chief Operating Officer, before which he was the CFO at the Australian Communications and Media Authority. Prior to that he was the CFO and Company Secretary at TransACT Communications (a regional telecommunications company). Tony's expertise lies in finance, strategy, risk management and governance. Tony has also built, owned and operated a plantation timber nursery, built workflow and activity-based costing models for the insurance industry, and held the position of Resort Accountant on Hamilton Island. He has also worked for Scotland Yard in its serious fraud squad.

Greg Turnbull joined the Pharmacy Guild as Communications Director in September 2008. Before coming to the Guild Greg worked in television, radio and newspaper journalism, and also as a media advisor to Federal politicians.

Philip Chindamo joined the Pharmacy Guild in March 2016. Before joining the Guild, Philip worked in various economic analysis and advisory roles in the public and private sectors. He has a Bachelor of Economics (Hons, First Class), Master of Commerce (Hons, First Class) and Executive Master of Public Administration. He is studying for his PhD.